The Lightfoot Letters - The Artist

My story starts not with a textile item but with a bundle of old letters that have taken me on an amazing textile journey, and one which is by no means complete.


In 2006 I bought a bundle of old letters from a Cheshire antiques centre.  The letters were tied together with a faded pink ribbon and at £3.25 they were a real bargain, so I gave them a home. 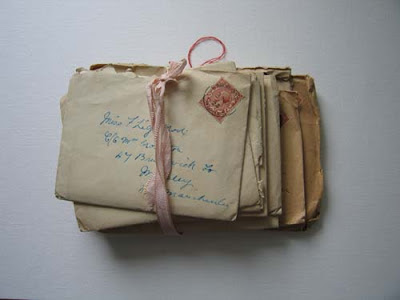 My initial intention was to cut the stamps from the envelopes and use them as collage material in my artwork. However when I got them home and started to read them, somewhat guiltily at first, I realised that I had discovered a treasure trove and my scissors were not allowed anywhere near them.


The letters were dated from 1923 and 1924 and had all been written to a Frances Lightfoot who was living away from her family with her aunt in Mossley, Manchester, The letters were written by various members of her family who lived in Farnworth, near Widnes, and they told the story of everyday life for a working class family. Mostly the letters were written by Frances’ mother, Ada Lightfoot, who kept Frances informed of all the local gossip, the antics of her younger brothers and sister and wrote copiously about the ordeal of doing the washing in the harsh winter of 1923. Other letters were written by her father Peter, her three brothers (Willie, Peter and Vincent), and her two little sisters ( Ada and Dorothy), although the latter were written on their behalf by their parents. The letters included stories of trips to the dentist, ice skating on frozen ponds, Christmas parties at school, killing pigs, mending boots and having to use a knife and fork at a hotpot supper whilst preferring a spoon.


These letters provided me with much inspiration for my textile art as I created art which was based on  the stories I discovered in these letters. As I read the letters certain phrases jumped out at me and it was these phrases that informed the work I created. I was moved by the numerous accounts of the minutiae of everyday life ,in particular the arduous task of doing the laundry and keeping her children clothed and warm, which Ada shared with her absent daughter. Instead of making the actual collages I had originally intended I created digital collages from the scans of the letters, incorporating  lines from the letters, images from my own personal photographic archive and items such as buttons, lace and stamps from the period. For example, I used a photograph of my own mother, taken in 1925, to represent little Dorothy, of whom Ada writes “she is delighted with the photograph of her with the nice frock” 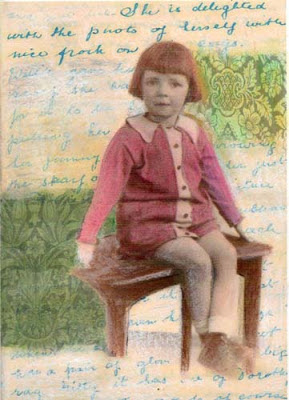 Doing the family’s washing in the harsh winter weather took up most of Ada’s week, suffering from what I now know to be bronchitis, she had to get help from her sons to put the clothes through the mangle and sometimes Peter, her second eldest son would stay off school to help her.


“The Washing Gets Me Down” is inspired by Ada’s references to the ordeal of doing the laundry which took her the best part of a week, and for this work I have used a image of my husband’s grandmothers, one of which was never seen without an overall. 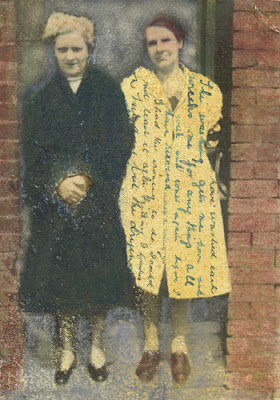 The next part of my story recounts a series of events that cumulated in a chance meeting, and an amazing coincidence. My work was being exhibited in 2010 at Macclesfield Museum where it was seen by someone who was looking for a textile artist, who worked with text, to be an artist in residence at an event for creative writers and poets. At this event I met a poet called Angela Topping with whom I made an initial connection, partly because she had included me in one of the poems she had written on the day, and partly because we realised that we were both interested in the condition of the working class woman and that we shared a common creative language. Angela’s poems made reference to the singer sewing machines, knitting, handbags, gloves and dresses, which also appeared in my textile art.  Our decision to collaborate came quite soon into our acquaintance, she sent me her poems and I sent her images of my work.

“Make me a Dress” was initially an unfinished sample depicting my grandmother sewing at her Singer Sewing Machine. Angela had just written a poem called ‘Paper Patterns’ which was inspired by an image of a corset I had made from sewing patterns. The first line of her poem, “Make me a dress the colour of the sky just after a June sunset” finished my work off nicely. 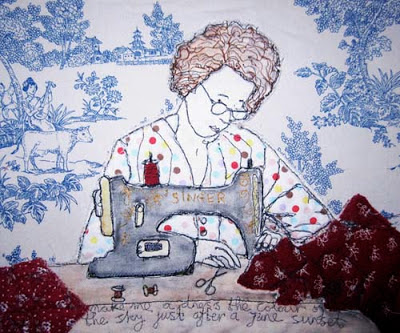 Angela and I met up again a few weeks later as I wanted to show her my work which was now being exhibited in Frodsham, and it was there looking at my work, answering Angela’s questions that we became increasingly aware that our connection was becoming more intertwined. As I talked about the letters and the family in them, Angela realised that I was talking about her own family and the letters had been written by the grandparents to her Aunt Frances. There were even a couple of letters written by her father to his elder sister. The atmosphere was electric, cold shivers ran down our spines, as they still do even today when I recount the event to people.

Once we had recovered, over a cup of hot tea, our decision to collaborate became set in stone,. We planned to stage an exhibition that would be a fusion of textile art and poetry, telling the story found in the Lightfoot Letters. We approached the Brindley Arts Centre in Runcorn, as this was the nearest gallery to Widnes, where the letters had originated, and received an enthusiastic response to our proposal. The exhibition ‘’The Lightfoot Letters” was held in August 2011, just one year after our initial meeting and my body of work grew from 8 pieces of work to 60, each one recounting a particular aspect of the story to be found in the letters and responding to the Angela’s poems.

As I was still particularly interested in the stories about the washing and clothing  I decided  to explore this theme further and create an installation based on Ada’s washing line with garments, each one recounting a particular aspect of Ada’s story. I began researching into the type of garments which would have been worn by working class families in the 1920’s and realised that their garments would be far removed from the ‘flapper’ styles we think of when we think of the 1920’s , In the particular the garments worn my children would not have changed much since the Victorian era. I derived much of my research from the pattern cutting books, used in schools at this time,  to teach young girls the skills of home dressmaking, such as Needlework and Cutting Out by Agnes Walker and Needlework, Knitting and Cutting Out by Elizabeth Rosevear. Since I wanted to cut text into the garments on Ada’s washing line I used these books to re-create garments from the period which I could them cut into without a guilty conscience. 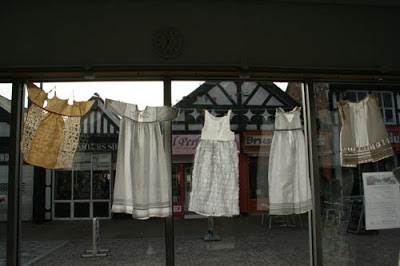 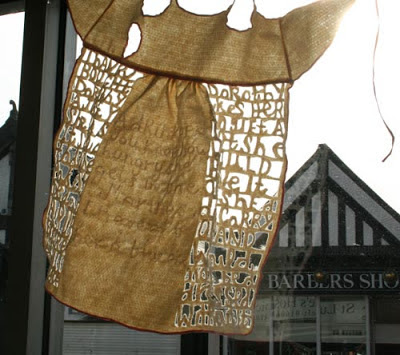 Another exciting aspect of our collaboration was that I was now able to use Angela’s images of her family in my artwork. Imagine my excitement when I was able to re-unite a photograph of the  each of the family members with their actual words.
I particularly enjoyed re-uniting Peter Lightfoot with his words about preferring a spoon to a knife and fork at a hot pot supper he was attending, and Ada Lightfoot with her moving words to Frances. “Doesn’t a pussy cat even cry if one kitty is lost? Is not a Mammy lonely when the girlie is away?”. 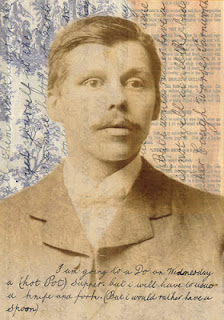 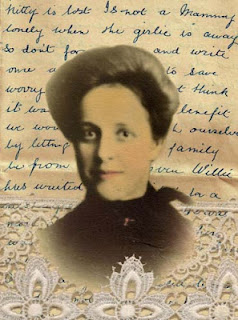 I have now made over sixty pieces of work and my body of work is still growing. There is not space here to talk about every piece of work but there is an opportunity  for you to see the exhibition again at Sale Waterside Arts Centre , Sale, Manchester from the 18th May to the 28th September 2013.

Posted by Professor Deborah Wynne at 16:20