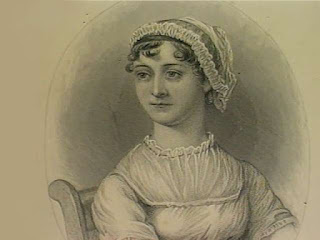 Many women writers of the past were skilled needlewomen. Jane Austen was no exception and she records her needlework activities, including making her own clothes. Edward Austen-Leigh wrote in 1870 that, ‘[H]er needlework both plain and ornamental was excellent […]. She was considered especially great in satin stitch. She spent much time in these occupations, and some of her merriest talk was over clothes which she and her companions were making, sometimes for themselves, and sometimes for the poor’ (Memoir of Jane Austen, p. 98). There is a patchwork quilt made by Jane Austen at Chawton House Museum, along with some items of her clothing, including a white pelisse. Austen’s love of clothes is evident in her letters to her sister, Cassandra. This is a good example of her enthusiasm:


‘My Cloak is come home, & here follows the pattern of its lace. – If you do not think it wide enough, I can give 3d a yard more for yours, & not go beyond the two Guineas, for my Cloak altogether does not cost quite two pounds. – I like it very much, & can now exclaim with delight, like J. Bond at Hay-Harvest, “This is what I’ve been looking for these three years”. I saw some Gauzes in a shop in Bath Street yesterday at only 4d a yard, but they were not so good or so pretty as mine.’  (2nd June 1799: in Selected Letters (ed.) V. Jones (OUP, 2009), pp.31-32)

Jane Austen’s illustration in the letter of the pattern of the lace on her cloak.
Yet Austen could be wary about expressing an interest in clothes in her novels, knowing that society viewed fashion as trivial and a sign of vanity, as this quotation from Northanger Abbey suggests:


‘Dress is at all times a frivolous distinction, and excessive solicitude about it often destroys its own aim. Catherine knew all this very well; her great aunt had read her a lecture on the subject only the Christmas before; and yet she lay awake ten minutes on Wednesday night debating between her spotted and her tamboured muslin, and nothing but the shortness of the time prevented her buying a new one for the evening.’ (Northanger Abbey)


The Drama of Costume


Jane Austen’s novels have been the source of numerous ‘costume dramas’, film and television adaptations which showcase the ‘otherness’ of the past by means of the characters’ dress. The pleasure in costume which fans of Austen adaptations experience is celebrated in the 1995 BBC series, Pride and Prejudice, where the opening credits focus on beautiful and sensuous fabrics, while a needle is shown busily at work:

This adaptation was renowned for a moment of undressing which gripped the media’s attention for some time, when Mr Darcy (played by Colin Firth), plunged into a lake wearing only a shirt and drawers. 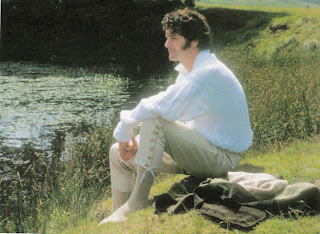 This, of course, was not a scene depicted by Austen, who rarely describes clothing in Pride and Prejudice, let alone the discarding of clothes. However, we often read a screen adaptation through its presentation of costume, and in the 1990s viewers may have wanted to see Mr Darcy as having qualities of the ‘new man’. The 1940 MGM film adaptation of Pride and Prejudice with Laurence Olivier as Mr Darcy, says more about mid-twentieth-century depictions of ‘the gentleman’, than about Regency styles of masculinity: 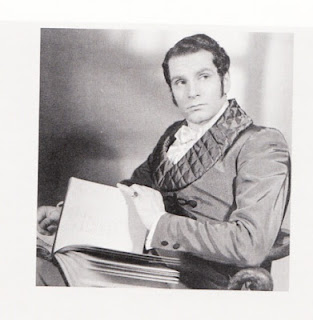 It is interesting to ponder why Austen spends so much time describing sewing, clothing and fashion in her letters, and so little time discussing these topics in most of her novels. This is rather different from the women writers of the Victorian period, Charlotte Brontë, George Eliot and Elizabeth Gaskell in particular. As I research my book, Literary Fabrics: Texts, Textiles and Costume Dramas, I will be giving this distinction some thought.
Prof Deborah Wynne, University of Chester

Posted by Professor Deborah Wynne at 15:01