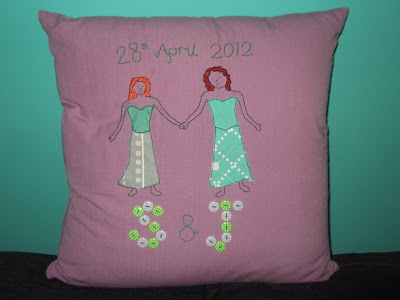 S&J, 28th April 2012
Better known as ‘The Lovely Cushion’, this was made for us by a friend. When we celebrated our handfasting and civil partnership, we were very clear that we wanted an occasion that was as self-made as possible. We ordered quantities of flowers to arrange in the house, and made our own bunting to decorate the garden. My sons were ushers, barmen, and general entertainers. Friends and family brought food, booze, love, good wishes for the future, laughter…and this beautiful cushion.

I love its wonkiness, its imperfection. I don’t know what it looked like in the original vision of its creator, but, for us, it encapsulates that day, and our relationship, perfectly. Spookily, it’s almost identical to a photo of us, walking towards the stone circle where we held our handfasting. Stitching is always potentially subversive, being a ‘women’s tradition’; I love the fact that the colour scheme is based on Suffragette colours.

What is it about textiles made by hand that’s so redolent of intent, so meaningful? For me, it’s the idea that someone spent the time and energy thinking about it in the first place, then sleuthed about to pick up pertinent details about the clothes we’d be wearing, picked out the thread to represent the colours of our hair and the fabric for our outfits, then made it, stitch by stitch. Materialising intent, quite literally. It sits on our sofa, centre stage – we even took it on honeymoon with us. Our hands, stitched together, will survive us. When my grandchildren own this cushion, they can make their own stories about it for their children. It says, ‘this was ours. Now it belongs to the future.’

Jen Davis, University of Chester
The Maker’s story
I've always tried to make home-made gifts when I have the chance, and have mucked around with sewing, embroidery and various other crafts since I was a child. I was largely taught by a childhood friend whose family was much more 'crafty' than my own, but I'm not particularly good at any of it - my enthusiasm always exceeds my ability. Nonetheless, I enjoy throwing myself into projects, some of which are ridiculously ambitious (I once re-upholstered a couch on a whim, entirely by hand), and almost all of which outstrip my actual skills.

I decided to embroider/applique a cushion for you and Sally because I'd recently enjoyed making one for my mother's sixtieth birthday. I love customising things - even if the end result is a bit wonky, it always feels more special than a generic gift.

The fabric pieces for the applique were from one of the trendy craft shops that has sprung up around Islington, and were chosen based on the information I'd managed to wheedle out of Sally re. the colour of the corsets and skirts that you and Sally were going to be wearing on the wedding day. I bought the cushion itself from a tiny local haberdashery in London, which is one of my favourite places to shop - it's not one of the trendy new craft places at all, but a very dingy joint run by a grumpy old man. And the overall purple and green colour scheme is the colours of the suffrage movement, which felt appropriate for a lesbian wedding.

It took a few nights of happy sewing to complete, and (as always) turned out nothing like the image I'd had in my head - I think the figures ended up being oddly unflattering to both of you, and the colour scheme looks a bit bonkers! But I enjoyed the process, and it was made with much love.
Dr Francesca Haig, University of Chester
Posted by Professor Deborah Wynne at 08:20